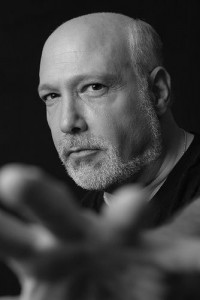 Stranded on this planet since 1955, The Sci-Fi Guy found the reality he missed and longed for in the only place Earth offered it: In the worlds of science fiction, fantasy, and horror.

Earthlings know him as Mark J. Gross, and many report sighting him at genre conventions since the early 1980s. Beginning in the final part of the last century, The Sci-Fi Guy infiltrated Earth’s media elite, and his cable access TV show, fittingly known as “Cosmic Visions,” provided access to many celebrities. An exhaustive video library documents these close encounters, and is available to professionals and laymen alike. For information about the DVDs, visit The Sci-Fi Guy’s eBay store, which also includes a unique assemblage of sci-fi, horror, and fantasy collectibles.

Many outstanding celebrities have come face-to-face with The Sci-Fi Guy, making the Markives a who’s who of Earth’s most prominent sci-fi figures: Ray Bradbury, Ray Harryhausen, Will and Jada Pinkett Smith, Jonathan Harris, Frank Gorshin, Forrest J. Ackerman, George A. Romero, and more.

After co-hosting a radio talk show in 2001 (which many speculate was a futile attempt to phone home), The Sci-Fi Guy appeared as an extra in several films such as ‘Cecil B Demented’ and ‘Carmilla.’

Currently, recurring sightings of The Sci-Fi Guy have been chronicled in an ongoing column for Autograph Magazine. He continues to document his celebrity interactions with video, however his column, The Sci-Fi Scene, devotes particular attention to each convention’s various guest stars and the art of autograph collecting.

If you see The Sci-Fi Guy at an upcoming show, say “hello,” particularly if you know of someone dabbling in the maintenance and repair of time machines. He could use the help.